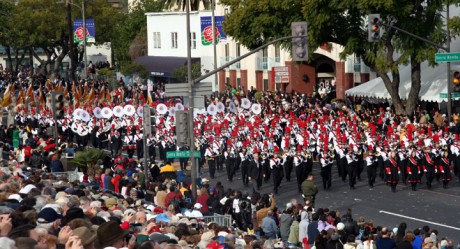 On January 1, 2008, 284 members of the Lakota West Marching Firebirds marched 5.5 miles down Pasadena’s famed Colorado Boulevard. They were members o 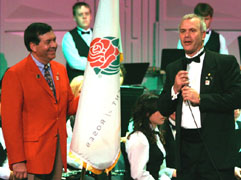 f the first band ever invited to represent Cincinnati and Southwest Ohio in the world-renowned Tournament of Roses Parade. The parade was seen by approximately one million in-person spectators, a domestic television audience of 40 million viewers and more than 350 million additional viewers in 150 international territories. The theme for the 119th parade was “Passport to the World’s Celebrations” with bands, floats and equestrians from around the world (just six high school bands from the U.S. performed). 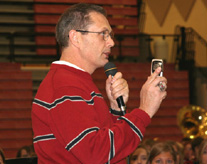 After congratulating the Marching Firebirds on their season, Lakota West Principal Richard Hamilton had a surprise in store for the band students, directors and audience members at the Marching Band Concert/Awards night. He held his cell phone up to the microphone. On the other end of the line was C.L. Keedy, Tournament of Roses President, who announced Lakota West’s selection as the first band from Cincinnati and Southwest Ohio to be invited to the Rose Parade. What a great end to the marching season… and what a great beginning for the “March to the Rose!” 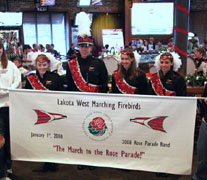 It was a full house at Champp’s in West Chester as members of the Lakota West Marching Firebirds celebrated the band’s selection for the January 1, 2008 Rose Parade. Band members, family and friends gathered to watch this year’s parade, enjoy a buffet brunch, purchase Rose Parade t-shirts, and join in the playing of marching band tunes and drum cadences. Greg Snyder, Lakota West Director, called the group from Pasadena where he was scouting this year’s parade. The event was covered by television news crews from channels 5 (NBC), 9 (ABC), 12 (CBS) and 19 (FOX). The Cincinnati Enquirer featured the announcement in the morning newspaper and also sent a photographer to the celebration. 365 days and counting….

Tournament of Roses President Visits Lakota West in May, 2007.

The Lakota West Bands were honored to host Tournament of Roses President C.L. Keedy and his wife, Adrienne, on May 21 – 24, 2007. Mr. Keedy presented Lakota West with the official Rose Parade Flag at the Spring Band Concert and threw out the ceremonial first pitch at the Cincinnati Reds’ “Lakota West Rose Parade Night”. During their visit, the Keedys toured the National Underground Railroad Freedom Center, cruised the mighty Ohio on a riverboat, and attended our Band Awards Night. At every opportunity, the Keedys emphasized how pleased they were to welcome Lakota West to the Tournament of Roses “family.” It didn’t take long for the Keedys to become cherished members of the Lakota West Bands family as well!

A Firebird’s Eye View of the Lakota West Marching Band in September, 2007.

Lakota West student and amateur pilot Mat Young took several photos of the Marching Firebirds during their September 19 practice for the Rose Parade. Yep, those orderly dots 1,800 feet below on the stadium track are Lakota West band members (click photo for a larger image). Mat writes: “It was kinda bumpy today but I managed to get the flight in and get some pretty good pics. Hopefully everyone will enjoy them. P.S. I have to give my girlfriend credit because she let me borrow her camera, and without it these wouldn’t be on here. Her name’s Megan Menke and she’s in the band as well (alto sax section).” 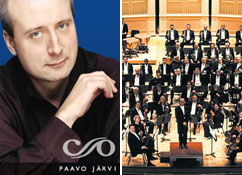 Paavo Järvi and the Cincinnati Symphony Orchestra performed a special fundraising concert for the Lakota West and Lakota East Band Programs before a sell-out crowd at the Lakota Freshman School. The program included overtures by Beethoven and Wagner and a Mozart flute concerto performed by CSO Principal Flutist Randolph Bowman. Paavo Järvi led the orchestra in a regional concert outside of Music Hall for the first time in his six-year tenure – an unprecedented concert to benefit a public school band program.

Cincinnati Ballet Performs in Fundraiser for Lakota Bands at the Freshman School on February 4, 2008.

West Chester and Liberty Township residents had the opportunity to see the internationally-known Cincinnati Ballet perform excerpts from Artistic Director Victoria Morgan’s Romeo and Juliet, as well as other excerpts and short works. Victoria Morgan introduced and provided her perspective on each dance. The Cincinnati Ballet performed as part of its commitment to the community and to music education. Proceeds supported the Lakota West and Lakota East band programs.

Past Ohio High School Bands in the Rose Parade